Is this risk what we really want for our children and grandchildren?

In my opinion cannabis is the most evil substance freely available in our world.  I know that there are many who will argue about its health benefits, but these should be explored in a proper scientific setting where any properties found to be useful are then distributed in a safe and prescribed way by proper physicians.  Our family has learnt at first hand how dangerous this so-called benign herb can be.

Our Good Friday Bank holiday started as normal with the usual family arguments over who was eating the most home-made hot cross buns as they came out of the oven.  Easter is an important family time for us.  Everyone then left and went to their respective homes leaving my husband and I to enjoy our day.  Later in the afternoon my husband realised that he needed a tool to sharpen his chain saw but had left his at his place of work.  He decided that he would ring our youngest son and see if he had one in his car.  There was no answer to his phone call, so he decided to wait until early evening to see if he could get hold of him again.  Once again there was no answer, so I suggested that he should ring our daughter in law’s mobile phone.  From then on, our weekend became a living hell.

Our daughter in law answered the phone from a hospital emergency department and told him that our precious eighteen-month-old baby grandson had managed to get hold of some cannabis resin owned by my son and had eaten some.  It had been left in a tin on the dining room table where our grandson had climbed up and found it.  She gave no details except that our son had been arrested by the police for endangering the life of a minor and taken to a police station and that she had been cautioned by the police before being allowed to travel in the ambulance with our grandson to hospital.

It was several more hours before we were able to find out which hospital he had been admitted to.  I went immediately to be with him.  Nothing can prepare you for the sight of your precious grandchild attached to machinery and struggling to cling on to life.  His little heart was tachycardic, his blood pressure fluctuating, and his oxygen levels kept falling, he kept going rigid and the screams coming from him will stay with me forever.  His limbs were floppy and unresponsive.

I sat with the cot side down, stroking his little head and cuddling him into me while the wonderful hospital team cared for him.  He needed observations taken every half an hour during which time the team of nurses and the paediatrician tried to rouse him.  Gradually the rigid spells subsided, but he was still unable to be roused.  At one thirty, in the early hours of the morning, the paediatrician was worrying about the fact that although his heart rate and blood pressure had settled, he was still unresponsive.  They started talking about encephalitis and possibly needing a CAT scan to assess if his little brain had been damaged.  They said that as he had ingested the cannabis at three in the afternoon they would have been expecting some response from him by that time.

At that point I asked the paediatrician if I could pick him up from the cot and try to rouse him.  They said that if he was still attached to all the monitors they thought it might help him.  I spent the next couple of hours singing nursery rhymes to him.  At three o’clock when the paediatrician returned and was trying to arouse him, I tickled him and sang Incy Wincy Spider - even though his little eyes were tight shut, he smiled.  The paediatrician asked me if that was his smile, and if it was normal.  He asked that I carry on stimulating him to see if we could arouse him.  I went on to This Little Piggy which made him giggle, although his eyes were still tight shut and his limbs unresponsive.  We persevered and finally his little eyes opened and focused on me and he smiled and laughed.  I left the paediatrician doing more tests on him while I visited the lavatory and when I came back into the high dependency unit, I called my grandson and he managed to turn and look at me, smile and lift his arms to come to me.  At that point the paediatrician told me that he was out of danger but still had a long way to go. He would no longer need to have a CAT scan as he obviously recognised me.  After each arousal he would slump back into a deep sleep, needing to be stimulated again thirty minutes later so that all the observations could be done.  Finally, at eight thirty in the morning I managed to arouse him enough for him to sit up in his cot unaided and play with some toys.  At nine o’clock the paediatrician agreed that he was well enough to be given a bottle as milk was easier than anything else for him to absorb.  After the bottle he then finally went to sleep tucked up under my chin for his first proper restful sleep since ingesting the cannabis.  He finally was able to come off the monitors at about two o’clock, just an hour short of twenty-four hours since he had eaten it. He was finally discharged from hospital at five thirty in the afternoon.

It was only a tiny amount that he had managed to eat, but the devastation to his little body was horrific.  My son had apparently been having trouble sleeping and had been advised by “friends” that taking cannabis would help him.

He now must live with the knowledge that his actions nearly led to the death of his much-treasured son.  There could be no worse punishment for him than to be at the other end of a telephone, not allowed to be at his son’s bedside, listening to him screaming and being unable to comfort him. He is absolutely devastated by what has happened but has admitted that he has become addicted to cannabis.  He is now starting the difficult road to beat his addiction but has said that he will never touch it again.

Time and time again we hear the clarion call for cannabis to be legalised, that it is not harmful, that it will not be available for children and that we can protect them.  We can’t! All the time this noxious substance is in homes, there is a risk to the safety of our children.  Not for one minute did my son think that my grandson would be able to climb up, get the tin and prise the lid open – but that is the nature of a child of that age – they are curious and the way they explore is through their mouths.

My precious grandson survived, but only because of the dedication and expertise of an amazing team of doctors and nurses.  Is this risk what we really want for our children and grandchildren? 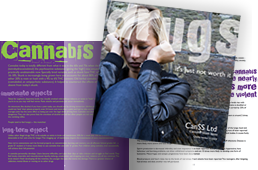